I've just set up a new app using Xamarin int he latest version of Microsoft Visual Studio and all NuGet packages are up to date, but after deploying to my test device I'm presented with 'Unhandled Exception: Java.Lang.NullPointerException: Attempt to invoke virtual method 'void android.support.v7.widget.ContentFrameLayout.setId(int)' on a null object reference occurred', without spending too much time trying to debug the very much apparent Xamarin bug, I decided to take to Google.

The only reason I'm posting this here is because it's a fairly awkward one to find on Google, and should prove a pretty easy and quick fix for most people is to change your Android application manifest from within Visual Studio to point to a newer target android version, such as Android 9.0 (API Level 28 - Pie) and a less obscure minimum version such as Android 4.4 (API Level 19 - Kit Kat). 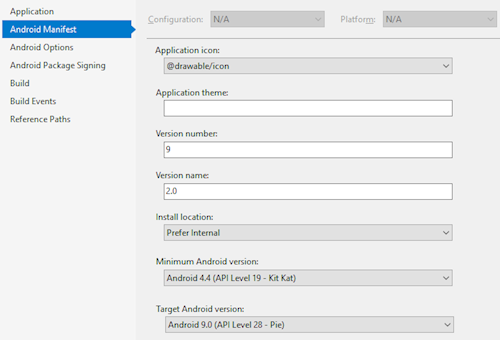 As you can see from the image above, it's a simple fix, but once you save the project, you might have to reload it.